Many of you will know the history to the incinerator, but for those who don’t, there is a timeline with some background to it on the no2incinerator website.

Unfortunately, there is an update on this, as the Environment Agency has somehow decided it is ‘minded to approve’ a permit for the incinerator to operate with a chimney stack of 35m.

Essex County Council gave planning permission for a stack of this height nearly a decade ago, but then turned down permission for a stack height of 58m in 2019. One of the reasons for this was that there is a lack of need for it. Clearly in the years between the original permission and the recent decision, a lot changed such as improved recycling rates and capacities in other facilities. The issue is now that the Environment Agency says it can’t take into account things like need, and has to focus on the environmental factors. In their opinion, as protectors of environmental and human health, this incinerator can go ahead. It had previously said that 35m would be too low, but has reversed its position, claiming that technology is now improved. To note, the technology being used in this 35m high chimney is untested in the UK and it will be the shortest chimney height of its kind in the country.

The Environment Agency announced its decision in the first couple of days of the new year, with a drop-in event as part of their ‘consultation’ held just a week later. This gave an incredibly short period of time to arrange attendance at the drop in, especially as it finished at 7pm, around the time many people get home from work. The consultation period itself is just four weeks, so it is incredibly important to provide as many responses to the agency to show why this decision is outrageous and wrong.

An event is now being organised at Coggeshall Village Hall with Priti Patel for Friday 24 January, to explain what this permit means. This is not being held by the Environment Agency but has been coordinated by local councillors and individuals who are concerned about the decision and who have been campaigning for years against it. 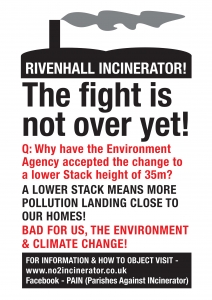 Whether you can make the event or not, objections are needed to encourage the Environment Agency to reverse their decision. To add on a separate topic, the Environment Agency is currently partnering on a flood prevention scheme centred around a huge quarry with Blackwater Aggregates (who is involved in this facility) and this is something that the community is also objecting against.

Should you wish to send an objection to the Environment Agency, you can find the text for a letter to send on the no2incinerator website. There are three different versions to send – you can send one, two or even all three of the letters. It is important that they receive as much representation as possible as this is a huge facility that will have a devastating impact on the area.

In a more enlightened time with greater awareness and data around climate change and what contribution incineration has to this, it is shocking that such a decision is being considered. Furthermore, when Essex County Council has said there is even not a need for it, we need to demand answers as to why it will go ahead.